Yes, I know I'm the worst blogger. I now have a ton of things to write about, but none of them will probably be as easy to write about as if I had just written about them right away. But anyway, there's no point whining; this post will be dedicated to filling you in on the "touristy" type things I've been up to. And I promise to be more regular with my posts. By the time you are reading this, I will be already starting another post.

I am (very) slowly increasing my number of friends here in Winnipeg, though it seems none of them are natives to area. There's Evelyn, who I went to high school with, and who lived in Winnipeg until the age of 10. She's reconnected with some elementary school friends, so probably knows the most people. Then there's Talitha (a scholarly young woman), who just graduated from McGill and who's from Altona, a small town outside of Winnipeg. She knows the "culture" better, so to speak, but not so many people. And then there is Kimble, who is another summer student from work. He's from Vancouver and so also knows virtually no one here.

Probably my most notable tourist adventure was to the Forks, where the mighty-ish Red River meets the equally mighty-ish Assiniboine River. I'm not exactly sure why it's the plural "Forks", since there is really only one fork (the French version understands that: it is simply "La Fourche").


Regardless, Talitha and Evelyn and I went one evening to explore. It's kind of a tourist "hub", with an indoor market, reminiscent of the Byward Market in Ottawa (and which Evelyn and I went back to explore in more detail - and eat perogies at - at a later time). Around it are a number of restaurants, the Winnipeg Children's Museum, and a hotel. Then there are some leisurely walks along the side of the river, and a few statues which, for some reason, Talitha and I found to be incredibly funny and ridiculous-looking. It was a beautiful day though, and it stays sunnier longer than at home, or in Ottawa, and so we could enjoy the green open spaces.

The Forks is also home to the beautiful (in my opinion; the design is, I guess, very controversial, not to mention the proposed content and pricetag) new Human Rights Museum. I think it'll be an awesome place to visit someday, but unfortunately it isn't yet open (nor will it be while I'm here).


Evelyn, the architect-in-training, tells us that the point of the museum is themed with the tall pointy Esplanade Riel that crosses the Red River to the French district, known as St. Boniface, which we wandered into a little bit.

Not far from the edge of the water, is the St. Boniface Cathedral, with a fancy, imposing facade at the end of a long, green garden. Surprisingly, though, it really is just an empty facade; it's just a single wall, and the actual "cathedral" itself, which is through the arch and across a courtyard, is significantly less exciting than we imagined.


My next great tourist adventure was for Doors Open Winnipeg, a weekend when dozens of interesting buildings around the city are open to the public to explore. Evelyn and I hit up the Vaughan Jail, which is an old... jail. The building itself is almost completely gutted (and I have no idea what it's used for now - it's not even a Heritage Building or anything) but there are some small and creepy cells remaining in the basement. It was a tour with period actors telling us about how the jail would have been at its height, and we got to learn plenty about Winnipeg back when it held the title of "Wickedest City in the Dominion", complete with bank robberies, murders and, of course, a vibrant neighbourhood of brothels.

Building number two was the Balmoral Hall School, which is just a block or two away from my place and which I pass on a daily basis. It's currently a private all-girls school, but it has on site a really old house that once housed the Lieutenant Governor of Manitoba back at the beginning of the last century. The main floor of the house is largely preserved as it was during his use, and is apparently used for "student government meetings". All I can say is that I wish my high school Student Council had had our meetings in a room so beautiful and tastefully decorated.


Our third visit (used as a way to stop us from watching all of Arrested Development Season 4 in one sitting when it came out) was to the one place that I had been dying to go to since arriving in Winnipeg. I genuinely feel that this building is the most interesting in Canada, and I had been building up the suspense of seeing it for ages. And stepping through the doors of the Manitoba Legislature lived up to those expectations. Now hold on, you're probably thinking that I'm excited because of the politics, but that's actually only a minor and incidental attraction. In fact, I'm interested in this building because of the symbolism of it's design and architecture. I first got interested in this building back in high school, thanks to a certain Mr. V. You see, the Manitoba Legislature has some of the most Masonic symbolism in North America, second only to what you'll find in Washington D.C. (as Dan Brown taught us).

Now, a couple of notes before I continue: first of all, Freemasonry is not Satanism/Devil Worship. Instead Freemasons today do many wonderful charitable things. They do however use a lot of symbolism draw from throughout history, including Greek and Roman times, Jewish mysticism and Christianity.
Second of all, some people dismiss seeing all this symbolism as being hogwash, and perhaps it is, but religious scholars have devoted their lives to studying this stuff, and it seems to all fit together. Plus, the architect was a Freemason. So I'm going to at least play along. Not to mention that some of the stuff is so neat that even if it doesn't mean anything, it still makes for neat architecture.


There is an entire book written on the symbolism of the Legislature, so I'm just going to touch on what I consider to be some of the highlights. The biggest idea is that the Legislature is meant to represent a temple - in particular, Solomon's. When you first enter, you are in a great hall at the bottom a staircase. And the room is littered with statues that are meant to ward off evil, just as in a temple. For example, the giant bison, symbols of Manitoba, are standing exactly where you'd expect to find sacred bulls in a Near East temple. Medusa is up on the wall, and their are even sphinxes just outside the main doors.
Up the Grand Staircase you come to a beautiful rotunda, with, in the middle, a circular balustrade which allows you to look down to black marble star one floor below. It matches perfect with the Golden Boy statue on the roof of the Legislature, and it is exactly where you would expect to find an altar. Circular altars were used in Greek or Roman temples for underworld gods.

And if all of this is getting a little too unbelievable at least some of the interesting parts of the Legislative Chamber should be appreciated for those not as into all this symbolism as I am. Because, interestingly, Manitoba is the only province to break from the typical Westminster-style of legislative chamber. Instead of two parallel rows of seats facing each other, like in, for example, the House of Commons, Manitoba's legislative chamber seats MLAs (the equivalent to Ontario MPPs) in a semicircle around the speaker's chair. This is said to promote cooperation, and hearkens back to Greek and Roman art. The symbolism of the building goes on and on - from the mural memorializing World War I, which appears to in fact show Jesus hidden among the soldiers, to the Golden Boy perched on the roof, who represents both Manitoba with his sheath of wheat and the Ancient Greek god Hermes. 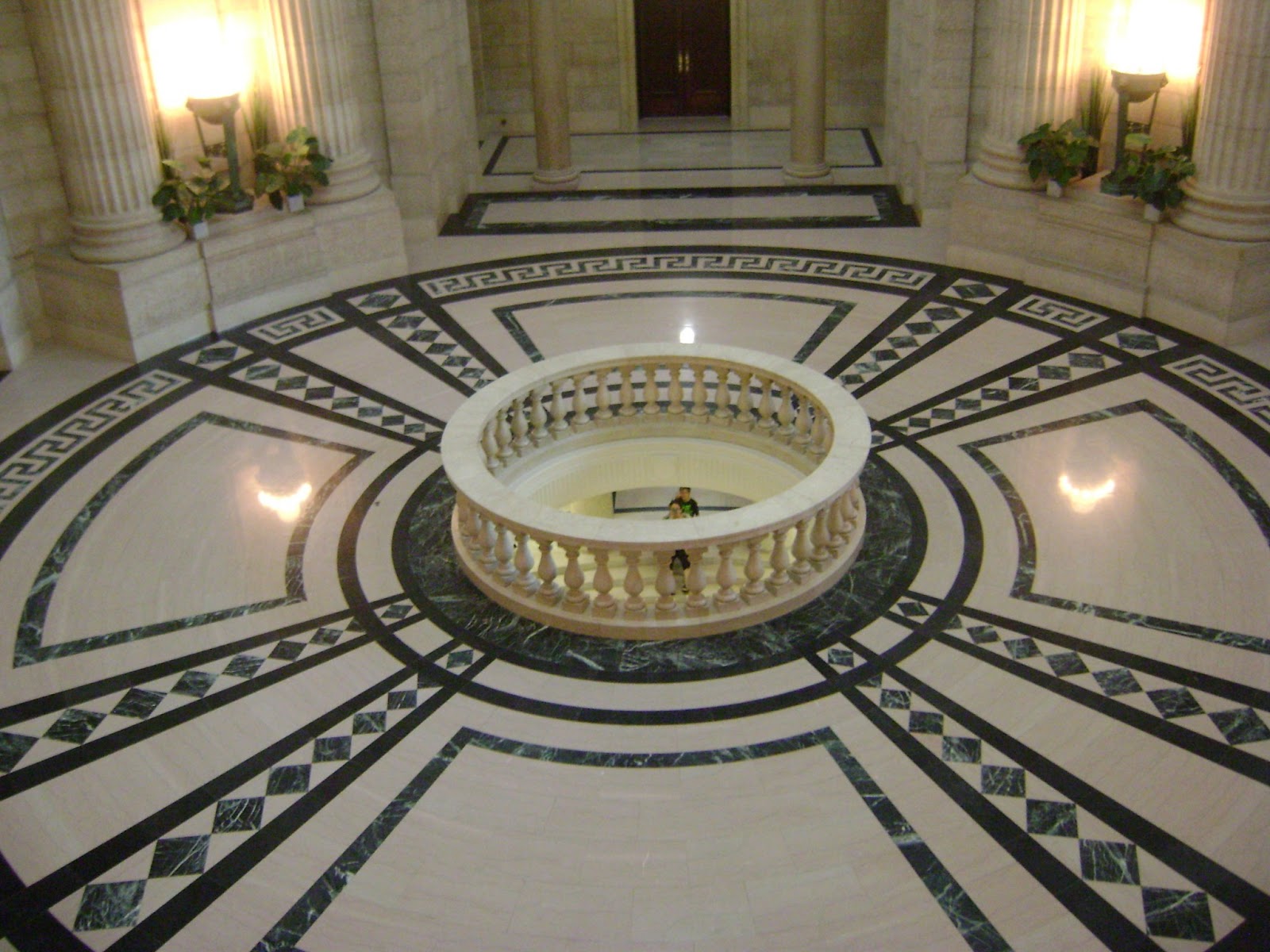 I haven't even scratched the surface of explaining all the cool stuff in this building, but hopefully you've at least gotten a sense for how awesome this place is and why I was so excited to visit. Apparently there is an independent tour company that gives tours specifically to highlight all this symbolism, and I'm hoping to go on one soon.

I'll just finish up on a really lame note: to end Doors Open Winnipeg, Evelyn and I tried to visit the Fort Garry hotel, which is a beautiful old building (a picture of it featured in my second post) that is apparently haunted. Unfortunately, the line up was an hours-long wait, so we only got to see the (pretty fancy) lobby. But I'm mentioning this to encourage people to come visit me here and stay in the hotel so that I can see inside properly. Thanks in advance.
Posted by Cameron at 9:27 PM